Three North Warwickshire organisations operating at the heart of their communities have been celebrating windfalls thanks to the generosity of Tamworth Co-op food shoppers.

The money was allocated from Tamworth Co-op’s Community Dividend Fund, which hands out more than £10,000 every year to worthwhile causes in the area.

Kingsbury School was presented with a cheque for £833, with Dordon Activities Group and The Phoenix Group North Warwickshire receiving £795 and £756 respectively. Customers at the Co-op’s convenience stores in Kingsbury, Dordon and Wood End raised the cash by donating the dividends earned on their purchases.

Martin Clarke, head teacher at the Kingsbury secondary school, promised to give his students a big say in how the money should be spent. 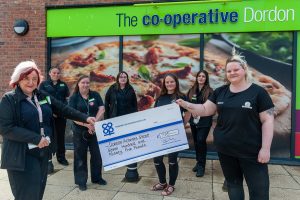 “It might be for additional seating, social time activities, a contribution to new toilets that our students have requested, or even the development of an enterprise venture, such as setting up a school vegetable garden.

“The garden venture would not only provide an enterprise activity for our students, it would also provide an opportunity for alternative educational provision and an initiative to make our school more sustainable.”

He said the school was ‘extremely grateful’ to receive the donation, adding:

“School funding is particularly challenging at the moment and contributions such as this allow us to provide opportunities to our students that would not necessarily be available.

“It is also meaningful to us to have the local community voluntarily supporting us through their kind donations. We would also like to thank the Tamworth Co-op for this excellent scheme which has benefited local communities for many years now.”

Byron Melia, founder and chairman of Dordon Activities Club, said his group’s grant will fund a series of family fun days in the school holidays starting in July.

“People can come along to the three-hour sessions on Mondays to enjoy a hot meal for just 50p and children can take part in various activities we organise, including bouncy castles,” he said.

“Many families in the village are on low incomes and events like this are especially important to them. Usually, between 60-70 people come along.

“We are so grateful to the shoppers and the Tamworth Co-op for helping the local community like this. I can assure everyone that this money will go a long way and help a lot of people in the village.”

Dordon Activities Group was formed in 2018 and is run entirely by a team of volunteers who also organise events such as Christmas discos and even film screenings attracting up to 600 people.

Although the Covid crisis resulted in the cancellation of most events, the group delivered food hampers to vulnerable people priced at £10 for contents which would normally cost more than twice that amount. Volunteers also donned costumes to hand out presents over Christmas and Easter.

Pauline Wilkes, secretary of The Phoenix Group North Warwickshire, said she had to rub her eyes when she saw the amount on the cheque.

“The Wood End Co-op store previously helped us with prizes for a big fundraising Christmas raffle and I thought that was generous of them, but then we got a cheque out of the blue for £756. I was amazed – it’s absolutely wonderful!”

The charity offers a lifeline to people either with or affected by dementia. Pauline knows the value of that support only too well, as she joined when her husband Derek was diagnosed with dementia many years ago. She continued to attend the group after his death and eventually took on her current role.

Before the pandemic about 60 members met for lunch each week at Wood End Working Men’s Club. They benefited from each other’s experiences and were entertained by musicians or speakers. As well as taking on quizzes and word searches, members also enjoyed occasional outings together.

The NHS funded the group until 2014. Members then decided to continue on an independent basis, raising money from a variety of activities. Several organisations, including a local food bank, still provide support.

Due to the success of Phoenix, a second branch was formed in Nuneaton. Sadly, all activities have been cancelled since the first lockdown. It is especially difficult for people suffering from dementia to comply with restrictions such as social distancing.

However, all members received a £15 gift voucher for Christmas in the post and had an Easter gift pack, containing a box of chocolates, a word search and a quiz, delivered to their homes.

Mrs Wilkes says the money from the Tamworth Co-op will fund a special outing once it is safe to meet up again.

“We are planning on a coach and river trip followed by lunch in either Stratford or Staffordshire. That will be a very special day because it would mean things would have pretty much returned to normal.”

Julie Gasper, business support manager at the Tamworth Co-operative Society, said it was a pleasure to be able to help the three organisations.

“The Community Dividend Fund was set up more than a decade ago and the nature of the causes we have been able to help makes all our efforts worthwhile.”