Polesworth Toddler Group volunteers are celebrating after being handed their biggest grant in 30 years which will prevent them having to reduce their sessions through lack of funds.

Shoppers at the village’s Co-op convenience store generously donated their dividends to raise £1,658 for the non-profit organisation. 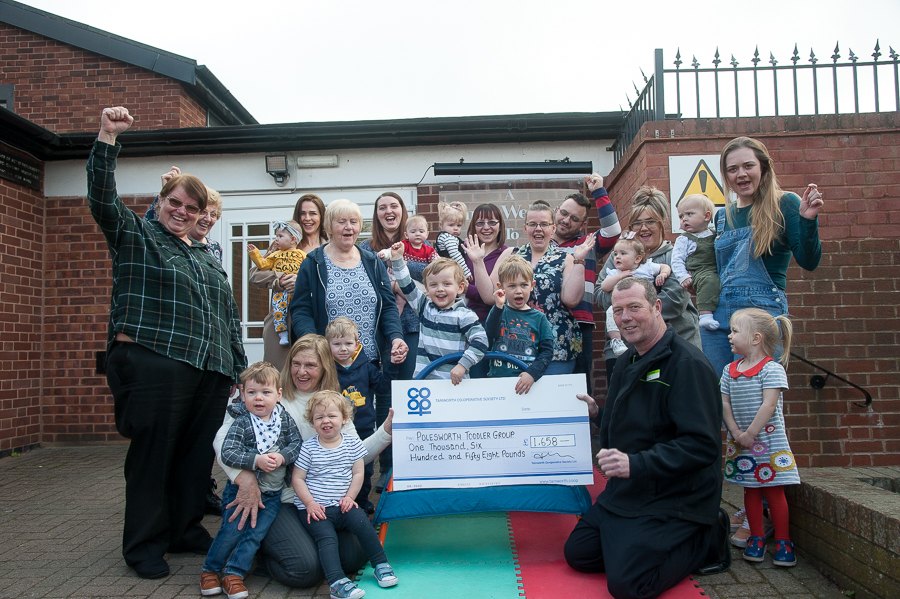 Sebastian Pirrie (left) and Rory Broderick, who have attended Polesworth Toddler Group since they were babies and are leaving in September 2019, accept the Community Dividend Fund cheque from Karl Vyse, manager of Polesworth Co-op. Celebrating with them are volunteers and parents from the group.

As well as avoiding having to shrink the service, the group will even have enough money left over to buy much needed toys and storage equipment.

Karl Vyse, manager of the Tamworth Co-op run store, said it was the largest amount being distributed this year from the Community Dividend Fund.

“We’re really pleased that our contribution will make such a difference to this valuable community organisation.”

Rachael Maddox, chairman of Polesworth Toddler Group, said: “We were absolutely astonished when we found out how much we were going to be given. It’s the biggest amount we’ve ever received by far.

“We had been facing shutting one of our two weekly, morning sessions or upping our charges, but now we won’t have to do that. We can’t thank the shoppers enough for their generosity.”

The group, run by five volunteers, caters for around 60 children, aged 0-4, who take part in a range of arts and crafts activities centred around celebrations, such as Easter, Hallowe’en, Christmas and the Chinese New Year They also have their handprints recorded for posterity every summer and enjoy singsongs.

Tamworth Co-op’s Community Dividend Fund scheme, now in its 10th year, gives thousands of pounds annually to community groups, charities and schools. Each of the Co-op’s eleven convenience stores, along with its supermarket and department store, adopts a worthy cause on its doorstep.