A bumper cheque from the Tamworth Co-op is helping tots to get to grips with computer technology before they even start school. 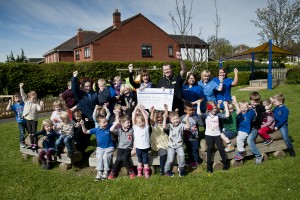 Karl Vyse, manager of Tamworth Co-op’s convenience store in Polesworth, hands over the bumper cheque to the delight of children and staff.

Pre-School manager Sharon Edwards says the money will be used to buy computer tablets for the two to four-year-olds to play with.

There should also be enough money left over to buy more toys and jigsaws.

The money came from the Community Dividend Fund which has boosted a string of community organisations during the past five years.

The cash was raised from shoppers at the Polesworth convenience store donating the dividends they have earned on purchases.

Pre-School manager Sharon Edwards said staff and parents were stunned by how much had been raised.

“We are extremely grateful to both the Tamworth Co-op and their customers, “ she said.

“It’s a fantastic scheme and it’s amazing how much the dividends add up.”

Polesworth Pre-School was set up in 1998 and operates from the Nethersole Academy.

Karl Vyse, manager of the Polesworth convenience store, said it was a ‘privilege’ to hand over such a substantial amount of money.

“It’s marvellous that the cash will be used to give youngsters computer skills at such an early age,” he said.