Tributes have been paid to the grandson of one of Tamworth’s best known historic characters who has died at the age of 90. 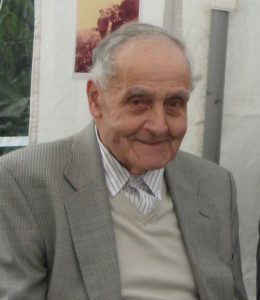 Frank Swinnerton who was the grandson of Edward Cole.

In keeping with this family connection, it was the Society that conducted Mr Swinnerton’s funeral at Sutton Crematorium, followed by interment of his ashes in his parents’ grave at Hopwas Church.

As a young lad he worked for his grandfather’s business and was a familiar figure in the town, walking in front of the cortege at children’s funerals and helping to carry the coffins.

Born at Hints Farm, he attended Hopwas Primary School and used to carry the cross into church. At 17 he broke his thigh bone when a horse bolted on his farm and was told he would never walk again. However, showing great resilience he proved the doctors wrong, although he never lost his limp. 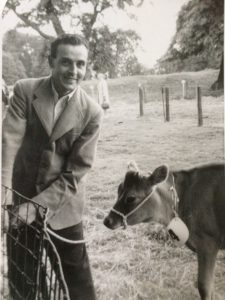 Farmer Frank Swinnerton as a young man with one of his cows.

In later years Mr Swinnerton had his own dairy farm at Canwell. He left in the 1990s and moved into a cottage at Drayton Bassett, but remarkably carried on working till he was 84 on his son Adrian’s farm at Shenstone.

Describing his father as ‘incredibly hardworking’, his son Richard said he regularly laboured from 6am to 11pm and only took two holidays in his long life. One was for his honeymoon in Devon, but he had to go home after a few days to attend to a cow that would only be milked by him.

He returned with his wife Sheila 40 years later, but refused to take any more breaks.

“As he put it, I’ve had two holidays in my life and that’s enough for any b****r,” said Richard. “He was a joker, but very serious about work and getting things done. He tended to do things the hard way. He would sort the potatoes on his knee by hand, rather than use machinery. Even in his sixties he preferred to hoe potato fields by hand.”

His other big interest in life was football. He was a lifelong Wolves supporter but only saw his first games at Molineux when he was in his seventies and eighties.

“He absolutely loved seeing them live, and amongst his prize possessions were letters and signed programmes by Steve Bull,” added Richard.

“Dad always followed their progress over the decades, usually with his ear glued to the wireless while carrying out the milking. When he was listening to the commentary there was no point talking to him because he would be purely focused on the match and would go mad when they scored.

“His last words were to his grandson about the new manager being appointed.

“Nearly 170 mourners attended the funeral. They were standing down all the side which considering his age is amazing. The weather was perfect for him because it was raining – which meant more farmers could come.”

Mr Swinnerton’s wife of 63 years, Sheila, who was also from Hints, died three years ago. He is also survived by another son Anthony and eight grandchildren.

Amanda Woodward, manager of the Tamworth Co-op funeral division, said: “It was an honour to be asked to conduct the funeral for the grandson of E J Cole, the historic Tamworth business that formed the roots of the Society’s funeral business.

“The Society bought E J Cole in 1950 and we still operate from the same location in Upper Gungate.”