Tamworth Co-operative Society has been thanked for its ‘generous donation’ to a charity set up to preserve the heritage assets of the co-operative movement in the UK.

The Co-operative Heritage Trust looks after collections from records to objects which tell the story of how the movement began, the way it grew and its influence on the social, economic and political history of the country.

Following the donation, the Trust has published an article about the Tamworth Co-op’s contribution in which it reflects on the Society’s rich heritage. 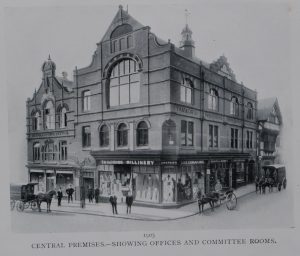 The central premises of Tamworth Co-operative Society pictured in 1903.

The article also explores the reasons that the Society has remained independent years after other regional organisations either merged with larger co-ops or went out of business.

It describes Tamworth Co-op as ‘a rare example of one able to weather the storms of change, expand and adapt to the needs of local people to remain independent.’

‘Tamworth continues to provide support for community projects and good causes ‘on the doorstep’ as well as having supported the shared heritage assets we care for which are the touchstone for co-ops large and small all over the country.’

Read the full article on the Co-operative Heritage Trust website.