Two Lichfield area community groups, which between them benefit the young and the more mature, have been boosted with cash gifts totalling nearly £1,200.

Whittington Wednesday Club has received £650 from Tamworth Co-operative Society’s Community Dividend Fund, while Lichfield’s 1206 (City of Lichfield) Squadron has been handed a cheque for £500.

The money was raised by customers at the Co-op’s food stores in Lichfield and Whittington donating the dividends they have earned on their purchases to the two causes.

Chris Jones, secretary of the Wednesday Club, said the grant would fund a big celebration for its 60 plus members as they come out of the Covid period. 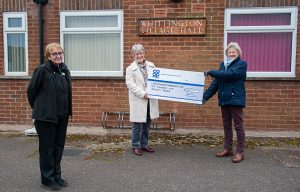 “We have a very thriving club, which meets twice a month in Whittington Village Hall, but due to the restrictions we’ve had to close all our activities,” she said.

“Hopefully some time in the summer when it’s safe to do so, we will be able to send out invitations to a big event where people can come and celebrate being together again.

“We’ll have the caterers in and put on a big cream tea with sandwiches and glasses of wine. We can have a good old celebration. Our members have been stuck in their own homes and in insolation for a long time now. This will  be a marvellous time to celebrate together. The money will also help us to put on more events and activities, something which we have done successfully in the past.”

Mrs Jones, who runs the long-established club with her husband and club treasurer Gary Hyde, said such donations also help to keep member costs to a minimum.

“It really helps to keep prices as low as possible whilst maintaining the standards of entertainment we have set. If costs were to rise, some could struggle and then numbers and activities can drop off,” she said.

“So I’m very grateful to the Tamworth Co-op for that reason too. I’d also like to thank all the shoppers who kindly donated their dividends.’’

“The donation from the Tamworth Co-operative Society is very much appreciated in what has been a very difficult year for the squadron,” he said.

“We’re going to put the money towards new computer tablets which will help with the delivery of our training syllabus once we are allowed to hold activities again.”

The squadron was established in 1963 at Whittington Barracks and recently changed its name from the Mercian squadron to reflect its long presence in Lichfield. Before the pandemic struck, more than 50 cadets took part in twice-weekly parade nights at the Cherry Orchard base. The Royal Air Force Air Cadets is one of the UK’s leading youth organisations and this year will celebrate its 80th anniversary.

Flt Lt Shaw said the Covid-19 crisis has had a huge impact on the squadron as all normal activities have been suspended for nearly a year.

“We are looking forward to welcoming back our cadets soon and being able to offer again the full range of activities available through membership of the RAF Air Cadets.”

Tamworth Co-op’s business support manager Julie Gasper said it was ‘a pleasure’ to be able to support two fantastic organisations in the Lichfield area.

“These two groups do amazing work and between them benefit a wide age group. We’re so pleased that we were able to support their activities this year. Hopefully they will soon be  back in action.”

*The Lichfield squadron is looking to recruit new cadets and adult volunteers as soon as meetings return to normal. Visit 1206mercian.org.uk for more information.