The Vicar of Amington vicar has praised the Tamworth Co-operative Society for paying for essential costs at this year’s village fete.

The event has become an increasing popular part of Amington’s calendar since 2007, but was not staged last year because the date clashed with Tamworth’s Olympic torch parade. 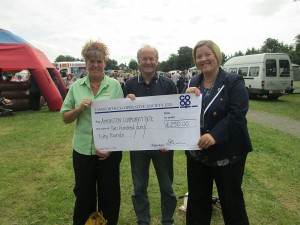 Nicola Gilbert, manager of the Tamworth Co-op convenience store in Amington hands over a cheque for £250 to Rev Mike Harris, the Vicar of Amington. Also pictured is Cllr Tina Clements, who was the Mayor of Tamworth on the date the fete took place

This year the event stormed back in style and Rev Mike Harris says the Tamworth Co-op’s Community Dividend Fund played an important part in that.

“The Tamworth Co-op gave us a cheque for £250 and this really helped us to pay for the electrical costs and also have insurance in place. They might not be the most glamorous elements of the fete, but believe me they are essential and have to be paid for.

“We’re very grateful to the Co-op for this cheque as we are to all the shoppers who helped raise the money for us. The money is raised in the community, for the community by the community. What could be better than that?”

The Tamworth Co-op scheme has raised more than £30,000 for numerous community organisations during the past three years. The money is raised by customers donating the dividends they have earned on their shopping to a cause paired with their local branch. More than £10,000 has been handed to 15 organisations this year.