A group of volunteers dedicated to enhancing a nature reserve near Tamworth have had their efforts rewarded for the second time in three years by the Tamworth Co-operative Society. 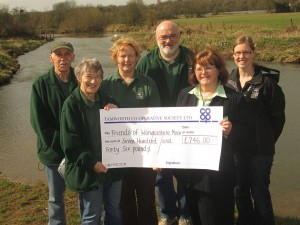 The Friends of Warwickshire Moor in Bolehall has received a cheque for £746 from the Society’s Community Dividend Fund.
Group secretary Pam Clark says the money will be spent on a new information board and will also help repair sections of a circular boardwalk which have rotted after being submerged in flood water from the River Anker.
In 2011 the group received a similar sum from the Society which helped to finance the completion of an all-weather circuit of pathways for walkers.

“The new information board will be placed at the entrance to the walk and will contain information on such things as wildlife,” said Pam.

“We want people to enjoy the moor which is very close to Tamworth town centre and we are extremely grateful to the Tamworth Co-op for again supporting our efforts.
“This is a brilliant scheme from a very ethical local organisation and it’s marvellous that each of its branches supports a different cause.”

The money for the Friends of Warwickshire Moor was raised by shoppers at the Bolehall convenience store donating the dividends they have earned on their purchases to the group. It’s just one of many causes being supported by the Society this year with more than £10,000 being handed out.