A Wilnecote war hero will no longer suffer the indignity of lying in an unmarked grave thanks to the Tamworth Co-operative Society. Private Frederick Arthur Stokes (23) returned home from the First World War in 1919, but died months afterwards from the effects of chemical warfare. 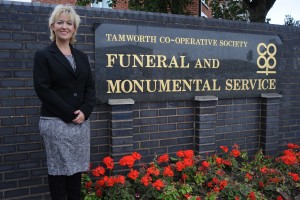 He took part in many bloody encounters against the Germans including the Battle of St Quentin in August 1914. Although he dodged the bullets, he was a victim of a poisonous gas attack which took his life shortly after peace was declared.

His tragic story was featured in the Herald following an approach from Amington history enthusiast, Dianne Wells.

Frederick’s unmarked grave was located in Amington cemetery by scouts carrying out a research project on local soldiers who died in the First World War.

Dianne led the call for a permanent memorial and is continuing to search for Frederick’s relatives.

The Tamworth Co-operative Society has now pledged to provide a memorial stone free-of-charge to the tragic young soldier.

“We read about his story in the Tamworth Herald and were all extremely moved by his situation,” said Amanda Woodward, general manager of Tamworth Co-op’s funeral division.

“To think he got back home, but then died from the effects of an enemy attack is just heart-breaking.

“The Tamworth Co-op is an independent Society formed in Tamworth in 1886. We thought this would be a fitting gesture from a company which, like the Tamworth Herald, would have been a significant part of the local business scene throughout Frederick’s life.

Chief executive Julian Coles said what Frederick achieved for his country should never be forgotten:

“We will provide him with a memorial stone so people will see his name in future and appreciate the ultimate sacrifice he made in the name of peace. As a town it’s time we gave something back to Frederick.

“We would be delighted to talk to Dianne and any family members she can trace about a suitable memorial. We are also grateful to the Tamworth Herald for bringing the story to public attention. Between us I’m sure we’ll do Frederick proud.”