Pupils at a village school are benefiting from new laptops paid for by shoppers at a Whittington convenience store generously donating their ‘divi’ money.

Customers at the co-operative store in Main Street raised £500, which has funded the purchase of extra Google Chromebooks at Howard Primary School in Elford.

School secretary Claire Robertson said the miniature laptops were already being put to good use to help the children with their lessons. 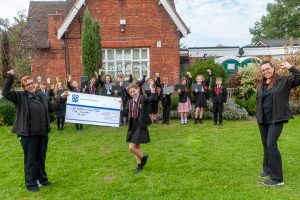 Sheila Villers (left), manager of the Whittington co-operative, and Michelle Ward, who works at the store as an assistant, handed over a giant cheque for the money raised to Howard Primary School. Beth (10,) who attends the Elford school, accepted the cheque, watched by fellow pupils pictured with their laptops.

‘We’re so thankful to the shoppers and the Co-op for giving their dividends to us. We wouldn’t have been able to afford these laptops otherwise. Before the children had to share a few laptops and a really old iPad, so this money has made a massive difference to the technology we’re able to provide.

“The whole school has access to the Chromebooks which is absolutely brilliant. They are ideal for young children because they’re small and easy to handle.”

The school has 60 pupils aged four to 11 who can use the shareable, web-based devices for their curriculum work.

The grant to the Friends of Howard Primary School has come from Tamworth Co-op’s Community Dividend Fund which hands out thousands of pounds annually to good causes.

Each of its eleven convenience stores, including the one in Whittington, adopts a charity or other local organisation to support.

Shoppers at Tamworth Co-op’s supermarket and town centre fashion outlet also participate in the scheme which allows them to donate their loyalty rewards to a deserving community group.

Sheila Villers, manager of the Whittington co-operative, said she was delighted the cash raised was enabling the youngsters to have such a valuable resource for their learning.

“It’s nice to know as well that the dividends are providing an ongoing benefit and that in future years more pupils will be able to use these laptops. Having a knowledge of how to use a computer is so essential these days, so it will also give them that skill.”

The Friends of Howard Primary is the school’s parent-teacher association. It holds regular fundraising events throughout the year, including film nights, cycle rides, fairs and sleepovers.