Pupils at a special school are looking forward to spending time in a giant tepee bought with dividend cash donated by generous shoppers at a Tamworth Co-op convenience store.

Customers at Stretton Co-op in James Brindley Way raised £500 towards the cost of the canvas tent which has been erected in the grounds of Fountains Primary ready for the new school year.

The tepee will be used for a variety of activities including story time and there will be logs inside for the youngsters to sit down on. 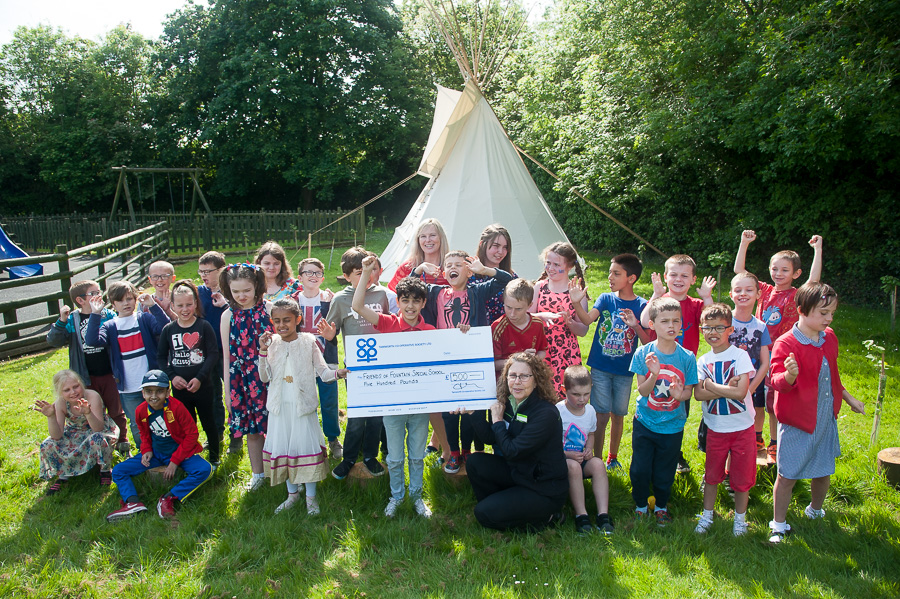 Marina Hutton, manager of Stretton Co-op, hands over the Community Dividend Fund cheque to delighted pupils at Fountains Primary and head of school Nicola Price, with the new tepee in the background.

Marina Hutton, manager of the store, presented a cheque for the money raised from the store’s Community Dividend Fund scheme.

She said: “Every year we invite customers to donate the dividends they earn on their purchases to a good cause in the area which they nominate. We’re delighted to see this donation being put to such good use.”

The waterproof shelter has been put up in a Forest School area which is being developed to give the pupils more time outdoors each day, both for learning and play. As well as the tepee – which was traditionally used by North American Indians – there will be a barefoot walk and a pond to stimulate their senses. The Friends of Fountains PTA has also helped raise funds for the project with trees being planted to enhance the environment.

The school caters for 130 children aged three to 11 with a range of learning difficulties including autism.

Head of school Nicola Price said: “We really do appreciate this donation and are very thankful for it. It will have a real impact on raising the pupils’ engagement in the Forest School straightaway. There’s a big national push for schools to do more physical education and get outdoors. This is going to be part of the curriculum from September. So they will be outside at least two hours a day, doing things like writing about what they see around them, listening to stories in the tepee, which the kids love, and making mud pies.”