Three community groups in the Tamworth area are singing the praises of local food shoppers after receiving more than £3,000 between them.

St George’s Preschool has been handed £1,298, with Dosthill Boys Club and Two Rivers High School picking up cheques for £936 and £902 respectively.

The money was raised from Tamworth Co-operative Society’s Community Dividend Fund which distributes around £10,000 annually to worthy causes in its trading areas. 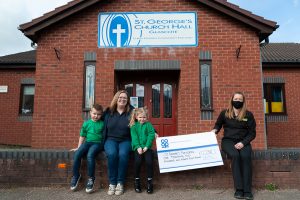 Jayne Cutforth, manager of Tamworth Co-op’s Glascote convenience store (right), hands over a cheque for £1,298 to Lou Davenport, manager of St George’s Preschool. Pictured with them are George Cotterill and Coral Latham, both aged four, who attend the group.

Shoppers receive dividends on their purchases but can opt to donate them to the organisation supported by the branch they visit. The money for the latest three causes was raised at the Tamworth Co-op town centre supermarket, plus the Society’s convenience stores in Glascote and Dosthill.

Lou Davenport, who has been manager of St George’s Preschool for the past 15 years, says she was ‘stunned’ by the amount raised for her group.

“We are run by St George’s Church in Bamford Street and use the church hall for activities. We are a tight ship and whatever money we make is ploughed back into running costs.

“So, this money is a really big deal to us. We are incredibly grateful to the Tamworth Co-op and also to the shoppers in the Glascote store.”

The cash will be used to buy an outdoor industrial gazebo where children can play even when it is raining.

“We’ve only been able to buy cheap versions in the past and they ended up only lasting a matter of weeks. This will be so much better. It means the children can be out in the fresh air even on rainy days. Our garden is also a bit of suntrap. The gazebo will provide a cooler place to play on hot days.

“There should even be money left over for various play items including some bikes and trikes.”

Jon Miller, leader of Dosthill Boys Club, was also amazed by the size of the cheque he received.

“It means we can buy new sports equipment, such as replacement nets and posts for volleyball, tennis and badminton.

“The money is a real blessing to us as we normally carry out various fundraising activities throughout the year, including a main fun day, but this year everything had to be postponed because of Covid.

Although it has used its historic name since it was founded in 1952, Dosthill Boys Club also caters for girls. Junior girls aged 9-13 meet on Mondays, junior boys on Wednesdays and there is also a weekly mixed session for senior members aged 13-18.

The club boasts its own premises in Cadogan Road and offers a wide range of sporting and social activities.  The land was donated by Miss Cleatle who left a cluster of cottages to be used by young people. Over the years the houses were developed into an impressive HQ for the club. It includes a main sports hall and games rooms.

“Prior to the pandemic we were catering for around 80 children a year,” said Mr Miller who leads a team of 12 fellow volunteers.

“Like myself, most of the volunteers here were club members when they were young. We got such a lot from the club then and now we get a lot from seeing the children also benefiting from it.”

The club will reopen when indoor activities for the youngsters can resume as Covid restrictions are eased.

“It’s so good that a local organisation like the Tamworth Co-op helps a voluntary group like us in the community. It was an amazing amount of money to receive. Our thanks go to everyone who donated their dividends.”

Gail Brindley, head teacher of Two Rivers High School, said the money has been spent on IT equipment to help pupils keep in touch during lockdown.

Two Rivers is a generic co-educational special school catering for around 190 pupils with a variety of needs.

“It is vital that we stay in communication with our pupils during times like this and help them to maintain their independence as much as possible.

“We’ve been able to buy specialised equipment, such as computers with enlarged keyboards for our visually impaired pupils. The money has helped us to support pupils and has been put to good use.”

She added: “We are exceptionally grateful to the Tamworth Co-operative Society and shoppers at the town centre supermarket for the money. It was a wonderful gesture from the Co-op to release the funds earlier in the year than usual to help organisations in difficult times.  I’m Tamworth born and bred and both my mother and myself had spells working for the Society, so it was special to receive this for the school.”

Julie Gasper, Tamworth Co-op’s business support manager, said the Community Dividend Fund has been an outstanding success for more than a decade.

“Thanks to the kind-hearted nature of local shoppers, we have been able to hand out well over £100,000 during that time. It’s been wonderful to support so many excellent organisations, and these three are no exception.”